Kilmallock GAA Club in ‘A League of Their Own’

Last Saturday night 9th February , in Bulgaden Castle, Kilmallock GAA held their first major fundraiser of 2019 and it was a resounding success. There was a full-house in attendance for the show and it was a night to remember.

Modelled on the sports based tv quiz show of the same name last Saturday nights show with John Fitzgerald, as host and quizmaster, saw these sporting greats test their sporting knowledge against each other. Also tested were their sports skills as they competed in a penalty shoot-out, hurling target shooting and a hilarious go-kart race. John Fitzgerald kept the pressure on the contestants with his quick-fire questions and played no small part in the great night’s entertainment as he extracted and teased stories and ‘tales out of school’ from the team members.

This was a fun-filled, laugh a minute night with Mick Galwey in great spirits after the Irish rugby and Kerry football wins earlier.

Not to lighten the mood but to share an extremely important message both Oisín McConville and Mark Enright took a little ‘time-out’ to tell their stories and the entire hall was in silence as they listened to two gripping accounts of the difficulties they had struggled to overcome. Oisín McConville told his story of addiction – gambling addiction – that started when he was a young teenager and grew to almost destroy him both financially and personally. He pleaded with anyone listening, struggling with addiction, to face up to it and seek help. Mark Walsh then took the floor and told his story. A young successful jockey with the world at his feet he was crippled by depression. Unable to get out of bed and unsure of his next move it was only through the chance intervention of a friend that he ‘broke down’ and thankfully, before it was too late, got the professional help that he needed. Again Mark pleaded with anyone feeling down or unsure to seek help. Both Oisín and Mark got a five-minute standing ovation from everyone in the hall.

This fundraiser was the brainchild of Gavin O’Mahony and Paudí O’Brien who did the lions-share of the work in organising this great night. Gavin and Paudí rounded up help from Eoin O’Connell (‘Roll it there Tadgh’), Jed Earls, Jim Flynn, Paul O’Mahony, Paul Tobin, Kevin Roche, Pat O’Riordan and Benni Burke. On the night they called in Kevin O’Mahony, Derek O’Mahony, Phelim O’Reilly and penalty-kick expert Brendan Hedderman. All other members of Kilmallock GAA committee were there on the night to lend their hands also.

Kilmallock GAA would like to thank their generous sponsors, without whom this night would not be possible, and urge all to support our sponsors.

We never doubted it but Kilmallock GAA is in ‘A League of Their Own’. 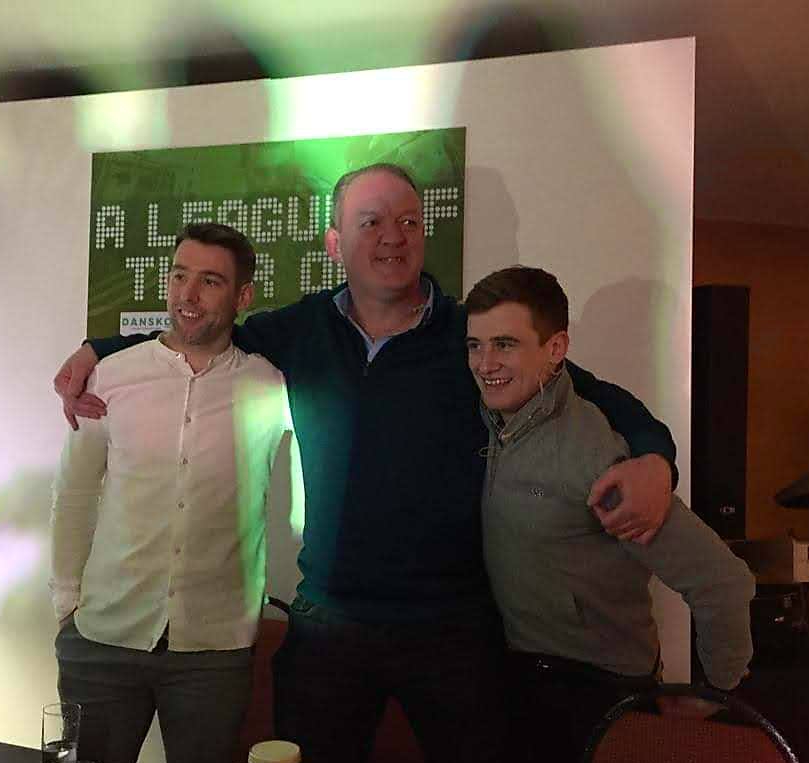