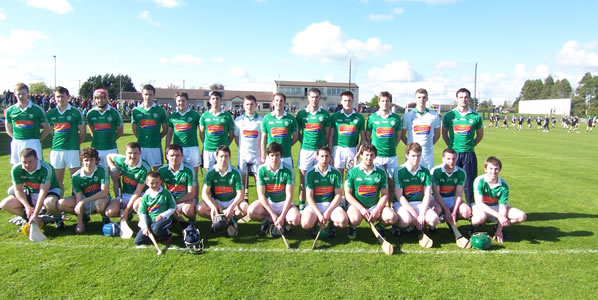 Kilmallock began the first round of the 2012 county senior hurling championship with an emphatic win over Knockainey.

The lads started off in whirlwind fashion and were1-2 up before The Knockainey lads knew what hit them. The goal came from Paudie O’Dwyer who was causing a lot of problems for the Knockainey defence. Paudie was ably assisted by John Kelly who had a fine game at centre forward, as well as Jake Mulcahy and Kevin O’Donnell who scored a smashing second goal.

Our backs kept a tight rein on the Knockainey forwards who were very much dependent on frees for their scores. Kilmallock led at half time by 2-8 to 0-6 and things were looking good for the second half as we now had the aid of a fairly strong wind .
True to form Kilmallock knocked over two quick points in succession at the beginning of the second half and were now well on the way to victory as the game was almost over as a contest.

Knockainey managed just two points in the second half as Kilmallock added six more to its total. It must also be stated that we shot quite a lot of wides particularly during the second half.

While this was a comprehensive victory the team management and the players will realise that this was far from a vintage performance and that more effort will be required as the championship progresses. However a win is a win and that will do for now.

Barry Hennessy had a solid game in goal and the six backs all had their moments, particularly Mark O’Loughlin, Liam Walsh, Gavin O’Mahony and Bryan O’Sullivan. Paudie O’Brien hurled effectively at midfield and was ably assisted by Eoin Ryan. While every one of the forwards scored from play.

A special word of congratulations to Mark O’Loughlin and John Meade who played their first full senior championship match for Kilmallock and acquitted themselves with distinction. Robbie Egan and Philip O’Loughlin were unavailable to play but it was nice to see Andrew O’Shaughnessy togged out among the substitutes.